Variety is key to his athletic skills, says lacrosse star 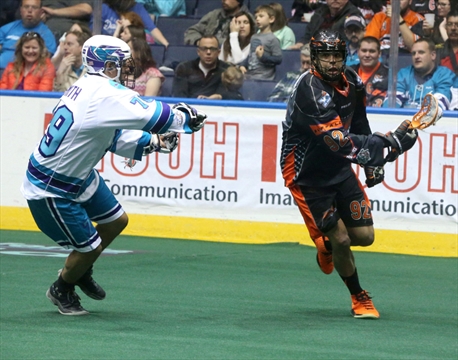 Kitchener’s Dhane Smith has a message for those parents out there that put their kids in one sport at the exclusion of other sports.

The Buffalo Bandits 24-year-old superstar, who just set the National Lacrosse League’s all-time single-season points record, insists his participation in all available sports through his youth is what propelled him to the top of the heap.

“You see nowadays some parents are pushing for one sport over the others and going hard on that one sport. I think my success has come from me playing as many sports as possible,” said the soft-spoken, multi-sport talent who has endeared himself to fans with his humble demeanour.

Smith, who notched his 131st point of the season on Saturday — that’s a mind-boggling 68 goals and 63 assists in 17 games — eventually specialized in lacrosse. But the Great Dhane held out for the longest time, even returning to high school for a Grade 12 victory lap so he could play football.

Like Wayne Gretzky, who attributed at least some of his hockey success to his off-season participation in baseball, Smith figures the skills and strategy acquired in other sports can pay dividends in a professional career.

Of course, at six-foot-three and 195 pounds, Smith is a naturally gifted athlete. He ran track and played high school basketball, volleyball, hockey and football at Huron Heights Secondary School along with the lacrosse he played in the summer.

He busted his ankle playing that final football season, an injury that ultimately forced him to abandon his other pursuits in favour of lacrosse.

“Growing up, lacrosse was always my favourite sport. So I figured that was my best choice.”

Since he was drafted fifth overall in 2012 by recent Waterloo Region hall of fame inductee, Bandits GM Steve Dietrich, Smith has amazed even his teammates with rapid ascent.

“I thought (Smith) was really good when I first watched him in junior, but I didn’t know he could become this good at this level so quick,” said fellow Kitchener product Ryan Benesch, Smith’s linemate with the Bandits.

“I’m pulling for him for even more success.”

Smith and Benesch, both nominated for Kitchener-Waterloo and area’s 2015 athlete of the year award, head into the Bandits’ regular-season finale on Saturday night when New England visits the First Niagara Center.

Smith can put the finishing touches on his season for the ages. He needs four goals to surpass Athan Iannucci’s eight-year-old NLL record of 71 goals in a season.