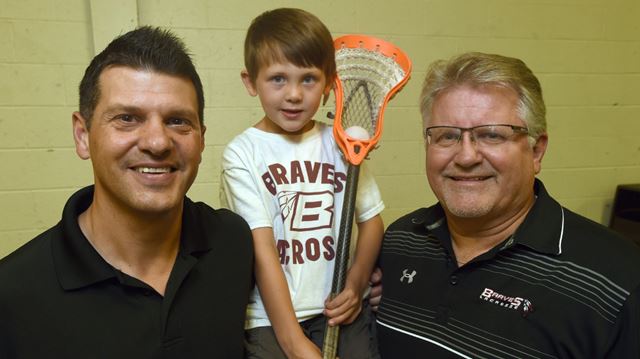 KITCHENER — Lawrie Hallman remembers when he and his boisterous 12-year-old teammates would pile into his dad’s 1966 Plymouth sedan for a road game in Fergus.

“Room for three across the front and three or four in the back,” Hallman recalled. “No air, windows down, no seatbelts, one radio station if you were lucky.”

His dad, Howard, never played lacrosse. But Howard’s sons Ray and Lawrie did and that meant he would be there to do whatever needed doing — from chauffeuring as many of Lawrie’s pals as could squeeze into the car, to serving as team president.

That can-do attitude was the start of a Hallman clan pledge, one that has transformed over the years into a family tradition.

Lawrie, now 62 and soon to be inducted into the builders’ wing of the Ontario Lacrosse’s hall of fame, is riding into his fifth decade in the sport — with the windows rolled down and the radio cranked up.

Those lessons learned from his dad are the same ones Lawrie has imparted to his own son, Corey, 44, and to his grandson, seven-year-old Ryder, who plays tyke lacrosse in the local association.

“We are just dumb enough to stay in the game,” Lawrie, self-deprecating as always, said about his family’s commitment to the game.

But Lawrie, the longtime president and board member of the Jr. A lacrosse’s Kitchener-Waterloo Braves and the team’s former coach and GM, loves lacrosse so much he can hardly imagine life without it.

And, the Braves can hardly imagine lacrosse without him.

When programs need printing, sponsors need to be lined up, the team’s golf tournaments needs to be organized or an alumni association needs to be launched, Lawrie is just the man.

“He’s been the backbone of the organization for decades,” said Corey, the Braves’ GM. “He’s super passionate about it. He just really wants to see the Braves be successful.”

And so when Lawrie watches as the team’s players transform from 17-year-old kids to grown men with families and successful careers of their own, he is certain his work has meant something.

“It just really makes you proud,” said Lawrie, the vice-president of information technology for a Kitchener-based industrial supply company. “I don’t like to boast about it. But I am proud of it.”

During his playing days with the Braves, Lawrie was known as an undersized forward who could run, score and make plays with the best of them.

To this day, Lawrie Hallman’s name is still among the top 50 assists leaders on the all-time Ontario Jr. B scoring list.

Corey, who arrived on the scene while his dad was still in the junior ranks, rode the Braves’ buses with the team in his diapers.

“Most of my childhood memories involve being around my dad and lacrosse,” said Corey, who went on to become the Braves’ water boy, then its captain, won a couple national titles with Brampton and the old Kitchener-Waterloo Kodiaks and briefly played pro lacrosse. “I don’t know any different.”

Of course, Lawrie coached his son through his minor lacrosse days and then became an assistant coach for the Braves in 1984. Lawrie took over the bench duties two years later and won a pair of Founders Cup Jr. B national titles in 1987 and ’88.   In 1991, Lawrie spearheaded the drive to reclassify the team as a Jr. A squad and helped to organize the Minto Cup championship in Waterloo in 2003.

Behind the scenes, Lawrie helped build one of the National Lacrosse League’s premier incubators, a minor and junior system that churned out professional stars like Steve (Chugger) Dietrich, Colin Doyle, Ryan Benesch and Dhane Smith.

These days, Corey’s son, Ryder, proudly wears No. 12 in the tyke ranks, the same number his grandfather and dad wore.

Hallman will be inducted into the Ontario lacrosse hall of fame at a dinner in Niagara Falls on Nov. 5.

HALLMAN CLAN From left, Corey Hallman, son Ryder and father Lawrie pose inside the Kinsmen arena. The Hallman name is one of the backbones of local lacrosse in Kitchener Waterloo. Lawrie is being inducted in to the Ontario lacrosse hall of fame.