As promised on Twitter yesterday, here are the results for penalty leaders for the Braves.  A shout out to Ralph Gubler for selecting his former teammate Brad Hause as the leader.  What is just as surprising as Brad’s penalty minutes is that he is 5th in all time scoring.  Just imagine if he stayed out of the box.  Brad is now an accomplished lawyer and most of those minutes were a by product of deliberating(arguing) the call.  Please note current assistant coach Eric Martin is #7, just imagine him trying to tell his guys “no stupid penalties”.

Not all players played the same number of games so we looked at the stats as average minutes per game.  Four of the top five played from 1967-1970, must have had sensitive referees or these guys were a bit off of their rockers.  Also, please not that Ron Keleher is the father of current assistant coach Steve Keleher, not sure Steve has the same family trait as his dad.

Here are the results.. 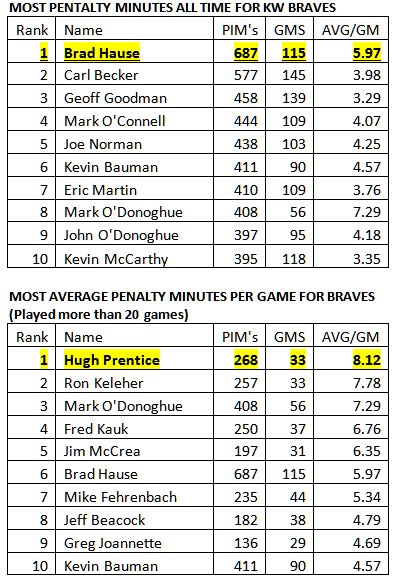